This summer, in addition to the usual summer-slide-combating schoolwork, we will be attempting two science projects!

Our first project will be to see what happens when we try to grow plants in some DIY Self-Watering Planters! O

ur planters will attempt to re-create the layout of Earthboxes, a self-watering container garden, on a smaller scale to see what happens!  These planters are my own design and we’ve never tried them before, so it’ll be interesting to see what the twins will hypothesize about what will happen, and whether or not it will match up with reality.  (Personally, I think that eventually, maybe the roots will grow out the lid holes and enter the bottom portion, but who knows?)

Once you’ve planted your seeds or seedlings and watered them the first time, wait until the jar lid has stopped dripping, then CAREFULLY lift out the top portion and fill the bottom portion with water so that when you put the top portion back, the jar lid and pour spout are submerged – be careful not to over-fill or you’ll have a mess on your hands! Then, the water will be wicked up into the top portion’s soil through the holes in the lid.

You won’t need to water everyday (unless your plant is REALLY thirsty or you live somewhere hot and dry and the water evaporates too quickly), but keep an eye on it to re-add water if the waterline falls below the jar lid.

Also if you start getting algae growth just empty and clean out the bottom portion and re-fill again.

Both my girls love to read.  But it wasn’t always so.

Zanna took to reading like a duck to water, and whenever her school has a reading incentive program, she’s like a little literary Terminator, just plowing through all available books and diligently recording each book in her reading log.  If there are prizes to be had – she WILL get one, or know the reason why!

Halle, however, has inherited my very low boredom threshold for repetitive tasks.  Unfortunately, most of the things taught in school, such as reading, writing and math, involve tons of repetition to get the foundational skills down.

Trying to teach her to read was like pulling teeth at times.  All the engaging workbooks I bought last summer to catch her up were viewed as though I’d asked her to eat moldy worms.

And then she got into some of the cool things that I like – superheroes, Star Trek and the like. I started showing her some of the cartoons that I’d liked at her age (back when dinosaurs roamed the earth), and we’d be geeking out together while Zanna had a ball playing My Little Pony with her father >:D

So I did some amazoning and found a set of phonics books with Scooby Doo.  Halle loved them!  And then I found some local comic book shops that had decently sized “Family Friendly” sections.  While Zanna enjoyed Strawberry Shortcake, My Little Pony, and Peanuts, Halle was thrilled with Scrooge McDuck, Scooby Doo and some Spiderman titles that were on the tamer side.  We fought over who got dibs on the new Star Trek reboot ‘verse comics.  Sometimes I even hear the girls in the backseat of the car squabbling over who gets the next turn with the Smurfs comic.

At first Halle would ask to have everything read to her, but as that depended on a reader having free time, she grew frustrated at having to wait and soon she was making the effort to read her comics all by herself!

She still likes being read to, but mostly it’s for bonding purposes, as she has become a pretty good reader herself!

A few weeks ago, I took Halle to Free Comic Book day at a couple of our local comic shops and she got to meet Spiderman himself!  She was thrilled about it, and about getting a pile of comics for free!  We shared our new stash with Zanna, and now there are several new titles both the girls are interested in:

Monster on the Hill and Maddy Kettle, as well as Pirate Penguin vs. Ninja Chicken.

Halle and Zanna both love reading regular books, but this geeky mama is pretty pleased that eventually I’ll have company when I attend comic book or sci-fi conventions in the future 😀

Having been much impressed by tales of teen and pre-teen girls inventing all sorts of life-improving doo-dads, my family is very much on board with getting Halle and Zanna interested in S.T.E.M. (Science, Technology, Engineering & Math).

There were several numbered bags of blocks in each set – so that the contents of the bags could be assembled one by one, without having to deal with a huge, confusing pile of mixed blocks!

First of all, we looked at the step-by-step instructions.  These are so great – they show exactly which parts you need for whichever step you’re at, and how many, and then lead you through the construction process.

For the most part, I left the girls to it.  This was an excellent skill-building opportunity: reading directions, following an order of operations, observation and troubleshooting as well as fine motor skills, collaborating and cooperation.

Whenever they had a problem, they’d ask for help and I’d tell them to go back a couple steps in the directions and observe the picture and their own project.  Compare the two – are there any differences?

They could find where things went wrong with no trouble, and soon things were once again moving along smoothly – well, mostly smoothly. 🙂

Both of the girls were so excited to work on these sets that they started fighting over who would get to do what step, so I made them take turns.  Halle would do one step and Zanna would do the next, and so on.

When they had finally completed their projects, the girls played with them, creating little stories and having such a good time that they barely even knew I existed (freeing me up to get other things done).

By bedtime, they still wanted to play on with their new Lego sets, Halle even wanted to have some in bed with her (no!), and the very next morning, we were almost late for school, because I couldn’t get the girls to stop playing with them!

And as soon as school was done – they were eager to get home and play some more!  So I leveraged – get ALL your homework done first, and THEN you can play with the Legos again.

Introduce your child to the fun of building with LEGO Juniors – our new range of Easy to Build sets for children ages 4-7. These quick and easy builds will give your child a feeling of accomplishment and provide hours of imaginative fun. 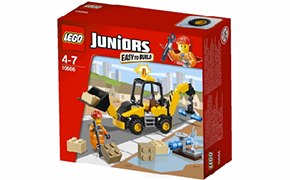 Hit the streets and repair the burst water pipe with the Easy to Build LEGO Juniors Digger. Use the bucket to dig down and the crane to lower the pipe into position! This iconic and Easy to Build set makes a great gift item as it is packed with cool details like the water pipes, valve and of course the Digger and its driver. It’s lots of fun and makes a great way to grow your child’s building skills. Includes a workman minifigure. 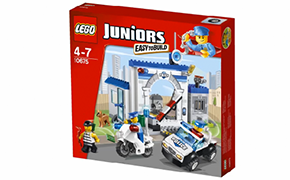 There’s been a breakout down at the town prison. One of the crooks has been able to escape and now he’s on the run! Give chase with the motorbike and police car then return him to the police station and back behind bars where he belongs! The fantastic Police – The Big Escape set is a great way to introduce your young builder to LEGO brick building. It makes a great gift set, too. Includes 3 minifigures with assorted accessories: 2 policemen and a crook.

*I received the products mentioned above from House Party’s Chatterbox program to facilitate this review.  All opinions expressed herein are my own and do not necessarily reflect those of House Party or Lego.

**Text in italics was provided by Lego and House Party

One of the last lingering effects of a former relative’s playing favorites with my twins, is that Halle can’t stand to see Zanna win or excel in anything or receive any kind of praise.

It doesn’t matter that Halle herself is equally praised, complimented and congratulated on her accomplishments, she just can’t stand it.  If Zanna is praised, Halle wants to be praised more, if Zanna looks as though she’s going to win a game, Halle’ll give up and throw a tantrum at the “unfairness” of it.

And for Zanna , she’d become afraid to compete against her sister, afraid to do anything well in the presence of her sister, and though she had great talent and love for art, she’d all but given that up, because getting complimented for it meant gaining the ire of her sister.

We’ve been wracking our brains on what to do here.  Both of the girls are victims in a way.

So after the last bout of tantrums because Zanna got praised for cleaning up her messy toys (while Halle had refused to pick up anything), I announced:

“You know what we need around here?  We need a special holiday!  We need a Mazel Tov Day!”

Both the girls were very curious about this.  “What is Mazel Tov?” they asked.

Well, Mazel Tov is Hebrew for “Congratulations, I’m happy for you!”

I told them that it’s important to be happy for other people and not begrudge them or get sore if they do well.  We can either choose to be a sore sport and get mad when anyone else does well, or we can congratulate them and feel happy that someone we know has done well!

In fact, instead of just a day of Mazel Tov, I think we need a week or a month, maybe!

I could see the wheels turning in Halle’s brain.  So I left things alone for awhile to percolate.

Later that day, I presented Halle with some art supplies she’d been begging for, and for Zanna, I pulled out a new sketchbook.  I could see Halle looking at us, so I did my best Mommy-Telepathy and projected: “Don’t you dare!”  She turned away and proceeded to start using her new art stuff and left her sister alone.

Zanna was overjoyed with her new sketchbook.  I asked her if she wanted anything special to use with it – liner markers, pencils, etc., but she said that she wanted to use the colored pencils we already had.  She happily scooted off to her room to get to work.

Soon Zanna came back showing the pictures she drew. (It was pretty obvious she’d become out of practice from the long hiatus.)  I complimented her art and suggested that she find a place on the wall to tape it up.

Then Halle asked, “What about me?”  So I asked her if she’d drawn anything yet.  “No,” she replied, so I told her to get busy and then we’ll see.  About half an hour later, Halle came up to me with a lovely picture of a monster that she’d drawn from an advertisement for something and I told her it was very well done!  I suggested that she also find a nice spot on the wall to tape it up.

So we’ll see.  I’m not kidding myself that we’ve managed to stamp out the problem completely, but at least we’ve found the language to effectively communicate what we expect from the girls, rather than a vague and general “Don’t do that!”